The Beacon is Shortlisted! 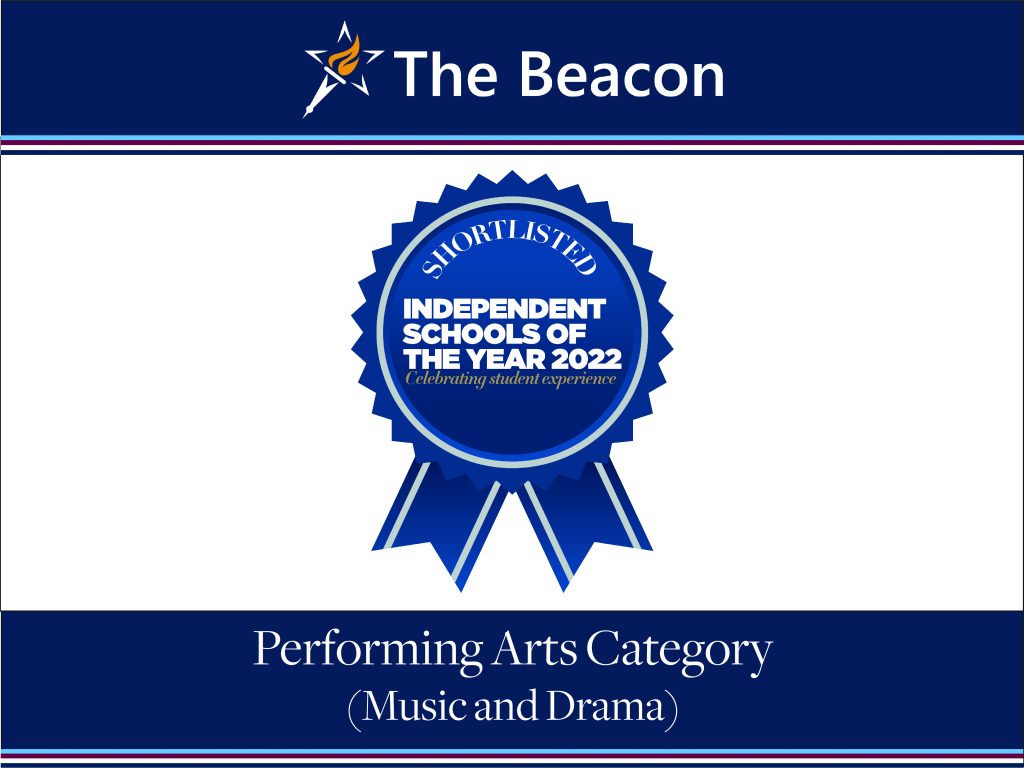 We are delighted to announce that we have been shortlisted for the Independent Schools of the Year Awards 2022 in the Performing Arts (Music and Drama) category.

Mrs Oosthuizen, our Head of Drama, said “We are thrilled that our department and school have been shortlisted for this incredible award again, especially after such a busy, creative and productive year!”

Here at The Beacon, Music and Drama are an integral part of school life from Reception upwards. Our boys are introduced at an early age to build confidence and encourage strength in performing. Over 100 boys currently receive weekly LAMDA tuition, which continues to deliver outstanding results, receiving a school record in 2022 with 94% of all boys awarded Distinction, 24% of which were offered High Distinctions (90+/100). This year, we were delighted to experience a host of exciting events, including The Beacon Musician of the Year, Year 2 Summer Showcase plus many more. Our boys have excelled during their rehearsals and were thrilled to be able to, once again, perform in front of a live audience.

We were pleased to host The Beacon Bard competition this year, which saw our 6 finalists perform brilliantly throughout the evening. Congratulations to all our boys who reached the final. In the same week, we were overwhelmed by the talent displayed during The Beacon Musician of the Year performance. We were presented with a variety of different instruments beautifully played, including the Violin, Piano and Trumpet. Click here to read the full story.

In Pre-Prep, our Year 2 boys shone during their Summer Showcase. An array of performances were presented to our audience, including World War II playlets performed by each Year 2 class as well as singing and Recorder playing.

In addition the above, we saw the final Year 8 production of Brainstorm, Informal Concerts, Instrumental Concert and of course the performances of Guys and Dolls Jr.

Throughout the Summer term, we enjoyed watching our boys build in confidence in their acting, singing and musical skills. As they embark upon the next stage of Beacon Life in September, they will be prepared to develop more confidence and be encouraged to have more determination to flourish.

This year, Edinburgh will experience The Beacon brilliance when our Beacon Boys perform at the Edinburgh Festival Fringe. The audience will see how a “bushel and a peck” of boys “can do” when the boys present their production of Guys and Dolls JR. beginning 7 August 2022. Click here to book your tickets!

The video below gives a flavour of our incredible Performing Arts department: