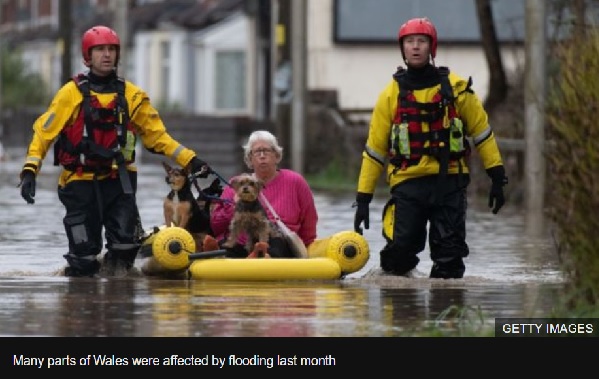 On 18 February large amounts of flooding was ongoing in the flood plains of Wales due to recent storms. The Welsh government has granted planning permission to multiple councils to be able to build new estates on these plains, to the unrest of campaigners and citizens.

During the past months flooding has been a great problem for the United Kingdom, specifically, for Wales. Many protesters have requested for the Governments to cease building houses in these plains. Dr Doug Parr, Chief Scientist of Greenpeace has stated his views: “Why are we planning to build more homes in high-risk flood areas when we know that the situation is only going to get worse because of the climate emergency?” Many people think that building houses on these flood plains is a bad idea, due to their vulnerability. Natural Resources Wales (NRW) has warned the recent floods prove the consequences of building houses on high-risk areas “are just too great”. However, in juxtaposition to this, local Welsh schoolteacher Mike Williams has said: “I think it is easy to point fingers at the government and our Prime Minister visiting Wales may not be the best idea. People need to get on with the job at hand.”

Clearly there are mixed opinions. Furthermore, many have complained about the lack of funding to Welsh flood defence systems, which has been a major player in the flooding of these areas. Specifically, one town, Newport, in South Wales has complained about the government overturning the council’s request for flooding defences, which has caused much outcry. Leigh Adams is just one of those affected by this indecision. He and his family had to run from their new house in Bassaleg, near Newport, as the River Ebbw swept away their garden.

But what do the government plan to do about this catastrophe? Many have criticized Boris Johnson for his belated response, so the WCVA have granted £11.5 Billion to councils across wales. The British government have put more money into the recent Fishlike floods instead. Moreover, many scientists have reason to believe that these floods have been caused by climate change. This emergency has indeed inspired parliament to reduce carbon emissions by 80%, and reduce plastic use.

In conclusion, it seems the government are uncertain about the future of flood defense in the UK and have yet plan to for another climate emergency.

By Charlie A and Charlie M